Date: Fri, Aug. 26, 2022
Location:  Bad Goisern, 4822 Bad Goisern
A combination of local tradition and folk music, great fun and entertainment with friends! On the agenda between the 26th to 28th August 2022.
Prices and more information

The large traditional folk’s festival on Lake Hallstatt. Once again it is time to get out the Lederhose and Dirndl. The ‘Goiserer’ shoes must be polished to a shine and the Gamsbart (Chamois beard) should sit properly on the hat. For the Gamsjagatage (Chamois Hunting Days) are on the agenda between the 26th to 28th August 2022. This original and unique event in Bad Goisern on Lake Hallstatt will be celebrated for the 54rd time! Also this year, the organisers will present particularly attractive highlights.

One of the highlights on the entertainment calendar is undoubtedly the gathering of old-style bicycle fans (Radl-Pirsch). There are over 200 participants, and together they complete a 6 km route, with stop-offs along the way. There is an exhibition of handicrafts in the social area, and admission is free. Enjoy drinks and snacks too. Sitting and chatting with friends makes time pass by all too quickly.

This means on one hand traditional customs, but on the other hand a lot of exotic. For nowhere else than in Gamsjagatagen (Chamois Hunting Days) are the old traditions maintained with so much humour and winking of an eye. Besides the proven classics such as the Gamstrophy, Gamskitztreffen (Chamois Kids Meeting), customs parade, craft show and culinary market the current release includes a whole host of new ideas and program items. Now nothing stands in the way of a varied, traditional weekend in the UNESCO World heritage region of Hallstatt Dachstein Salzkammergut!

This year, music will be performed in the marquee on the market square, the inner courtyard at Schloss Neuwildenstein, as well as in the two Goisern museums and the Kirchengasse alleyway. Courtesy of the „Radl-Pirsch“, fans of old-style bikes can take a ride on one of their old bone-shakers. A more detailed programme and further information will be available here at the beginning of July.

There’s practically nobody in the Salzkammergut who has never heard of this traditional event or who has not attended it at least once in its many years of existence. Bad Goisern is known for its musical excellence, and there is no better an occasion to experience it than over these three days.

This is an example of a small gathering that has grown to become a huge cultural experience. All the original ideas have been maintained and traditions retained. The event is popular with the young and young at heart who are fans of folk music, traditional ways of life and good old entertainment.

The wide and charismatic valley of Bad Goisern stretches out from Hallstatt in the south to Bad Ischl, the summer holiday resort of the emperor in the north. Discoveries dating back to the Stone Age and the Hallstatt period enable us to establish that there was a close contact with villagers from the surrounding regions. The wood and agriculture industry developed very early in the wide fertile valley of Bad Goisern, to supply the mine in Hallstatt. This is how Bad Goisern is where it is now, on prettiest landscapes of the UNESCO World Heritage region of Hallstatt Dachstein Salzkammergut. This enchanting village used to be called “The Monarchies most beautiful village“ and still hasn’t lost any of its charm. Among the most beautiful places of interest are the oldest salt mine in the world and the ossuary in Hallstatt, a romantic boat ride on Lake Hallstatt, a trip to the breathtaking cave world in Obertraun and a visit to the Lake Gosau with the mighty Dachstein glacier. Additionally, Bad Goisern is popular in the summer with hikers and bikers. In winter guests are lured in by the ski areas of Dachstein West in Gosau and the Ski and Freeride Arena in neighboring Obertraun with perfect slope conditions. We wish you an unforgettable holiday in Bad Goisern on Lake Hallstatt. 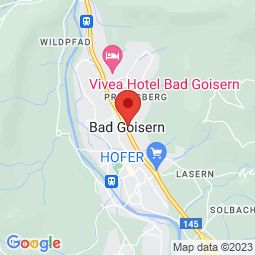